Over 100 further Will extracts have been added to SynagogueScribes Secular database. These can be searched here

Plus we are already collating a third batch of extracts to be added soon. Amongst them was a lucky find, which we can’t wait to mention. You don’t normally expect to find detailed information of an individual’s marriage in their will but the following just go to prove you can never be certain of anything.

In a long section at the beginning of her will Esther refers to a “certain indenture tripartite” dated “on or about 10th November, last past” (ie 1802) … “in contemplation of my marriage with my said husband”.
The agreement between her intended husband Nathan Salomon and herself involved the transfer of “the capital sum of Thirty three thousand three hundred and thirty three pounds, six shillings and eight pence stock three percent consolidated bank annuities his own property” to four trustees  Edward Roberts of the Eschequer, Westminster; William Flaunteroy, Banker of Bowers Street; Asher Goldsmid, Broker of Leman Street and Benjamin Goldsmid Esq. of Rochampton” She states that according to the agreement the marriage was to be solemnized within one month of the signing of the treaty.

There follows a series of stipulations of the future disposition of the monies essentially to the effect that after the marriage the interest accrued is to be paid to her for her sole benefit. If she dies before him then the interest should accrue to him but if she outlives him then to her and if both are deceased then the interest should be paid to any children of the body “of her intended husband on my body to be begotten”. There follows details of the future disposition of this and other assets.

Here is the marriage between Esther  Joachim (nee Goldsmid) and Nathan Salomons GSM 072/04 1802 [14  Nov] h and a mini tree can be found on CemeteryScribes here.

Benjamin Goldsmid (will written in 1798 (with later codicils).  Probate granted in 1808)
His will begins with the stipulation that he be interred in the burial gound of the Great Synagogue and that his grave be guarded for one month to prevent any molestation of his body. Then in a long section he refers to a “certain indenture” “purporting to be a settlement in contemplation of my marriage to my dear wife Jesse” dated on or about 8th August 1787. The agreement was made with his future wife Jesse and her father Israel Levin Salomons of Clapton. The trustees were his brother Abraham Goldsmid, Merchant of Prescott Street, Goodmans Fields and Esther Salomons of Clapton the mother of Jesse.

The consideration in the agreement was the payment of three thousand pounds to be paid from his funds within six months of the signing of the agreement. This to be held by the trustees for the use of Jesse. If he were to die without having sired any children a further two thousand pounds would be delivered to the trustees. However, since that time children were conceived and he stipulates that two thousand pounds be set aside for them. There follows details of the future disposition of this and other assets

Will extracts were prepared, and generously contributed, by David Alexander 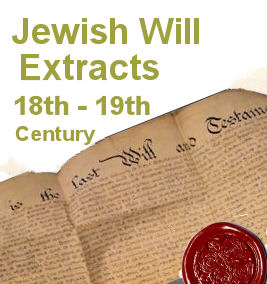 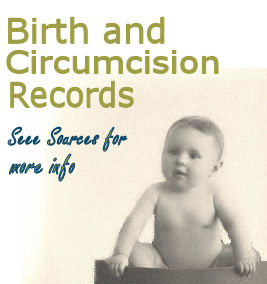