There are a number of fascinating elements to Isaac Aboab’s Will, an abstract of which, thanks to David Alexander, will soon be added to SynagogueScribes’ ever growing collection.

Isaac was born in Tetuan (a city in northern Morocco) in about 1712 and  died in Oct 1786 London. He was a successful merchant living in Gibraltar since 1720. Jews had been expelled from Gibraltar in 1717 and readmitted the following year when the island was cut-off from supplies from Spain. By 1749 Isaac had become the largest property owner on the island, much of which was damaged during the Great Siege, Isaac then moved to Bishopsgate, London.

Many Wills refer to possessions = the gold ring given to a daughter, prayer books given to a son -but, generally, we have little or no idea what they looked like. However, the ‘Sash Sticks and Bells to be sold’ described in Isaac’s Will, would seem to be those now held at the V & A, part of the Montefiore Collection which can be seen here 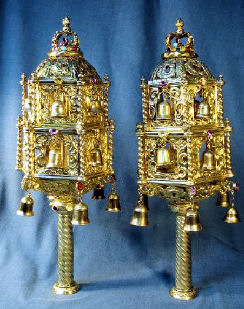 The Hebrew inscription reads   “These bells belong to the wise and esteemed Isaac Aboab. They were finished on the 18th of the month of Ethanim in the festival of Succoth 1771-2”
Isaac also left money for the rebuilding the Synagogue in Gibraltar which had been burnt down during the siege.

Isaac did not have any children or at least none that were mentioned in his Will, however he did have two wives, Hannah born about 1727 in Gibraltar and Simha ben Esquera born 1749 Tetuan. The death notice in the Morning Post Sat 14 Oct 1786, explains this as being the result of being “born in Barbary, where a plurality of wives is allowed.”

Obviously Hannah’s marriage contract did not include a provision against this as some Sephardic women stipulated in their dowry contracts, an example is that of Sarah Baruch Carvaglio, who married Moses Attias in 1667 and whose contract included such a provision, as did that of Rebecca Francia wife of Moses Alvares Vega.

Isaac’s younger wife Simha re-married in Oct 1787, a year after Isaac’s death, to Jacob Abram Attias.
—
Sources: National Archives of Gibraltar, Transregional and Transnational Families in Europe and Beyond: Experiences Since the Middle Ages, Christopher H. Johnson. Historic Marriage Patterns in the Sephardim of Gibraltar, 1704 to 1939 Lawrence A. Sawchuck and Doris Ann Herring