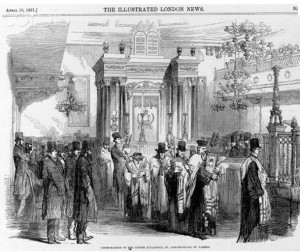 The Western Synagogue was established in 1761, if not earlier. The congregation  met at the house of Wolf Liepman in Great Pulteney street.

In around 1765 a room was hired in Back alley, Denmark Court, Strand and moved to Dibdin’s Theatre, Sans Souci in Denmark Court in 1797.

A break away congregation was formed in 1810 which became Maiden Lane Synagogue.

WSC : SOME CIRCUMCISION RECORDS PUBLISHED IN “THE WESTERN SYNAGOGUE THROUGH TWO CENTURIES (1761 – 1961)” by Arthur Barnett, published by Vallentine – Mitchell London 1961

BSWSM : WESTERN SYNAGOGUE MARRIAGES 1806 -1843.  Translated and  Transcribed by Dr. Bernard Susser.  The original registers belonged to the Western Marble Arch Synagogue. Copyright in Hyamson extracts including Hyamson’s notes belongs to Southampton University or to the Hyamson Estate. Copyright of  Translation belongs to Bernard Susser. Reproduced by kind permission of Frank Gent and the Susser Archive.