On Thursday 28 July 1869, Jane Mathews stood before Alderman Hale in a London Police Court,   charged with “annoying” her husband, Mr Julius Mathews, an Importer of Leadenhall Street.  From the dock, she stated that she had written to her husband for money, but had only received a note in return and had therefore gone to see him in person.  The case, which was reported in the Jewish Chronicle (The Jewish Victorian 1861–1870: Doreen Berger 2004), also received an unusually wide coverage in the National Press: at its heart lay the position of Jewish marriage and divorce in relation to English law. Jane Mathews probably had a narrower and more personal perspective: as today’s popular press might have it . “Bitter, abandoned, wife pursues errant husband across Continents for basic maintenance”

Julius Mathews and Jane Hirsch Elsbach were married at the Great Synagogue London on 10 Nov 1847 (www.synagoguescribes.co.uk)  Jane, a native of Germany, had been in England from at least 1841 when, aged about 15, she was living with her brother and his family in Whitechapel (1841 Census Jacob Elsback  NA Ref: HO107 Piece:716 Book/Folio: 8/27)  Julius arrived in  Hull in 1844  aged around 19 (Julius Mathews. Port of Arrival: Hull, England: 20 May 1844. Port of Departure: Hamburg, Germany: Ship: Queen of Scotland  Country of Origin/Native of: Hamburg, Germany (Source Ancestry.com)

The couple had three children  Caroline, Jeanette  and Solomon, and in 1851, along with Julius’s two brothers, Joseph and Hyman, were living at 4, Montague Street, Whitechapel  (HO107 Piece: 1544 Folio: 439 Page: 2) But some time between then and 1857, Julius abandoned his wife and left for Australia, taking his three children with him. His brothers appear to have accompanied him as they, too, can be found in the Australian records and the press.

In June 1857 Julius married Annie Horwitz, another recently arrived immigrant to Australia  The marriage was conducted by Mr M Myers, Minister of the Congregation (of the Western Synagogue Melbourne) “according to the rites and ceremonies of the Jewish Faith” In the box denoting marital status, is written “divorced according to the rites of the Jewish faith”.  Julius also acknowledged the existence of the three children by his former wife.  So there was no attempt at concealment in regard to his earlier marriage, or of the ‘get’, accorded to him by the Chief Rabbi in London, some time prior to his departure for Australia, and his status as a divorced man was accepted by the authorities.

What of Jane during this time?  In November 1858 she was examined by the Parish of St Botolph Aldgate with regard to her Settlement status.  This does not necessarily mean that she was destitute, but, presumably, the Parish Council had some concern regarding her ability to  support herself (For further information on Settlements see http://www.londonlives.org/static/Settlement.jsp )

(Abstract for the St, Botolph district available on CD from http://www.wsfhs.co.uk/pages/recordseries.php

Jane was in her early teens when she  came to England, so it is reasonable to suppose that, had she been told her divorce was legal, she would have had no reason to doubt it.  Any more than Julius or, indeed, the London Beth Din.  And from subsequent newspaper reports, the position of a ‘Get’, or Jewish divorce, in relation to English civil law, seem singularly unclear. 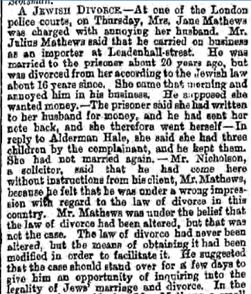 This confusion is made evident by M. D.A. Freeman in the introduction to his book “Jews and the Law of Divorce in England” which refers directly to the period prior to 1857 – the exact time when Julius Mathews applied for his get. So the question of legality may only have arisen as a result of Jane Mathews’ Settlement Examination, and possible attempts by the Parish to make Julius responsible for her maintenance.

That Jane continued to “annoy” her family is apparent:

as late as 1894 the Melbourne Argus reported that she was contesting the Will of her son, Solomon, who had died the previous year in the Kew Asylum, aged 39,  leaving property valued at over £600.  As with her previous brushes with the Law, the outcome, thus far, remains unknown.  As does Jane herself: was she a “difficult” wife who deserved her fate?  Or a poor young woman, at the mercy of the male-orientated social, religious,  and legal practices of the day, doomed to live a hand to mouth existence whilst her husband flourished?

Julius Mathew and his wife and children returned to Australia where, once again, he found himself at the centre of court case, again arising from a complex interpretation  of Jewish law.

“ACTION FOR LIBEL BY A JEWISH RABBI. (FROM THE “EVENING WORLD.”An action for libel, which has been commenced in the Supreme Court by the Rev. Dr. Jacobson, late minister to the Melbourne Hebrew Congregation, claiming £5,000 damages from Mr. Julius Mathews……”  http://trove.nla.gov.au/ndp/del/page/9077351

Details of various Mathews’ burials can be found on Beverley Davis’s fantastic database http://www.bd-bd.info/ and some of their marriages are due to appear in a new dataset of Australian Jewish Marriages, to be published later this year on www.synagoguescribes.co.uk