SynagogueScribes would like to thank John Lehman, owner of COADB.com for the following article on Jewish Heraldry:

As a rule, there are no separate rules or restrictions on Jewish heraldic achievements than there is on gentile or non-Jewish, households. Almost all Jewish “Armiger” or person who is either qualified or to have a heraldic coat-of-arms or has been granted a coat-of-arms is in any way different than a non Jew.

There is significant provenance that European Jewry used what can be loosely defined as  “heraldic”  symbols on documents and business transaction in Europe as far back as the later half of the 14th century. Merchants of all classes and religious persuasions used seals. In a preliterate world, where the majority of people alive were either illiterate or functionally illiterate, this practice made a great deal of sense.-It also did not differentiate their stamps or seals from any other in common usage. However it should be noted there are several reoccurring symbols or themes that can be found in the early Jewish heraldic tradition which have carried through to the modern twenty first century.

The first symbol which was often seen in stamps and later shields, was the use of a yellow woven straw hat which had a high peak or conical tower woven into it. This hat called a “Judenhat” had to be worn by Jewish men, when walking outside in the non-Jewish world. At first this was not necessarily a sign of antisemitism, but it later became one. The ancient town of Judenhat in Styria, Austria which was a market town established in the 13th century still retains as their city’s arms, a red shield with a white or argent outline of a Jewish man wearing a hat.

The last symbol long associated with Judaism and Jewish heraldry of course is the Star of David. An ancient symbol associated with the historical King of Israel and the royal line of rulers who were his descendants. It should be noted these are the most obvious and well known elements. As with any form of heraldry, an occupational symbol such as a “shuttle cock” can be representational for a cloth merchant or a draper. The entire world of heraldry is open to anyone, regardless of ethnicity or religion.

The single most wealthy family in the world is of course the Rothschild industrialist and banking family. (It is estimated they have either earned or generated more wealth than any other family in the history of the world.) Their family coat-of-arms have no “traditional” Jewish attribution by what one would call Jewish Iconography. The Blazon of their arms as granted to them by Emperor Francis I of Austria reads thus: “First quarter, an eagle sable surcharged in dexter by a field gules (referring to the Imperial and Royal Austrian Coat of Arms); Second quarter, gules, a leopard passant proper (referring to the English Coat of Arms); Third quarter, a lion rampant (referring to the Hessian Electoral Coat of Arms); Fourth quarter, azure, an arm bearing five arrows (a symbol of the unity of the five brothers). In the centre of the coat a shield gules. Right hand supporter, a greyhound, a symbol of loyalty; left supporter, a stork, a symbol of piety and content. Crest: a coronet surmounted by the lion of Hesse.” 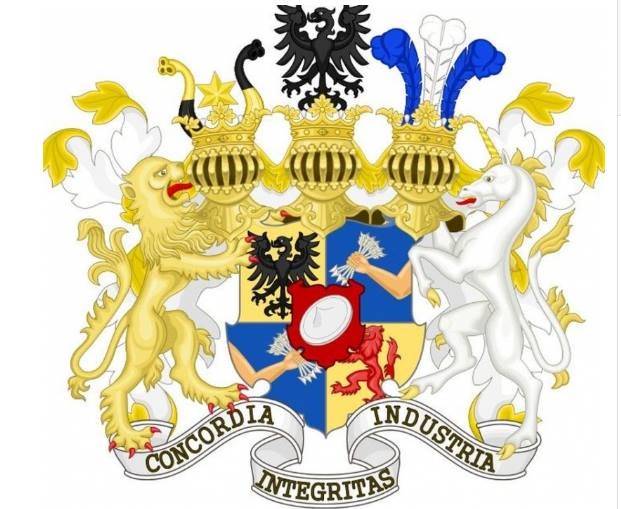 One of the other Families which has arrived at prominence was that of the Sassoons. They were once merchant princes of the courts of Baghdad, and moved to Bombay India to establish their trading empire under the umbrella of the British Raj. The Sassoon family is rumored to be the descendants of Ibn Shoshans, one of the merchant families of ancient Armenia. Sir Albert Abdullah David Sassoon, 1st Baronet, came to Britain from Bombay (Mumbai) and quickly became one of the political movers and bankers in England. The blazon of his arms reads:

“Or a palm tree eradicated purpure, between on the dexter a pomegranate, also purpure and on the sinister a branch of laurel fructed, vert both purpure. On the chief Azure, a Lion passant of the first in the dexter paw a rod erect Or.  Crest-On a mount Vert a fern brake surmounted by a dove volant, having in the beak a Laurel branch all Purpure. The wings seme’ of estoiles, Or with the motto of Candide et constanter or Candid and consistently.-Burke’s Peerage.

We have two fine examples of continental and British heraldry. Both are unique, both Jewish. The later example of the Sassoon family incorporates traditional elements of their faith and of their family origins in south-west Asia.

Ultimately it will be the future Armiger to decide what to include in their arms. Hebrew mottoes, Star of David, the Lion of Judah, a Menorah or even a representation of the commandments are all acceptable and time honored traditions within the heraldic world.

-Rothschild Arms by sodacan from the Wikimedia commons.

COADB.com currently has over 9,000 arms listed with many more to come, entries include the meaning behind each Coat of Arms, origin and meaning of the family name. Plus a particularly interesting feature for genealogists is the list of alternative spellings of each surname.