We have been robbed!.  Not once, but twice!   Firstly, by a Very Large, Highly Respectable, 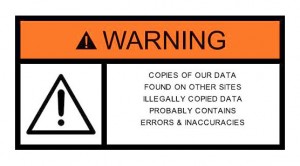 Organisation.  We still aren’t  clear what  possessed them.  Over-enthusiasm? Naievete? Or sheer thoughtlessness?   Whatever the cause, the result  has been highly damaging. Whole datasets from our SynagogueScribes database and large amounts of data from our CemeteryScribes website have been copied to their website without permission or proper consultation.  Once alerted to these infringements, and, to their credit,  they are now acting to redress the situation.  And, because they are an organisation who are interested in the promotion of properly researched genealogy, the data has not been intentionally tampered with, although some of the Hebrew parts of the records appear to have been incorrectly entered.

Unfortunately, at the same time as incorporating this material into their own searchable database, they also made it available in the form of a downloadable gedcom, with no immediately apparent restrictions on use.  We cannot know how many people have downloaded this gedcom  – which contains unauthorised transcripts from other providers, not just ourselves.  Nor what use they may put it to.

Worse case scenario is that it could fetch up on a pay-to-view site and researchers will find themselves paying for incorrect material that they could have had for free, and which, since it would still carry the name of the original known and trusted source providers, they will assume to be accurate .  A double whammy, if ever there was one!

Meanwhile, our present pressing concerns lie with one specific site, devoted to a particular branch of Jewish Genealogy, which has uploaded all this gedcom material on to their website and who refuse to withdraw it, even though they have been courteously apprised that they are infringing ours and others’ copyrights.  So, not only are they re-publishing incorrectly loaded records they have no rights to but, far more dangerous and far more damaging,  they are allowing the records to be wiki-ed.

The original record was written in the Synagogue Register by a scribe on the day the event,  – birth, marriage, death, circumcision – was recorded.  You cannot take a pen and strike it through, or add an insertion with a proof-reader’s symbol

The same respect must be paid to transcriptions of the original record. If we come across an apparent ‘error’ in the record or if , for example, where no English names have been recorded, we can add more details about the individuals concerned, we will happily do so in a note.  But, as we have said, the original record is a primary source and cannot be tampered: neither should a report or transcription of that record.

So we issue this Warning to serious Jewish genealogists and family historians: Material sourced to  Angela Shire, SynagogueScribes, or CemeteryScribes that has been illegally republished on other websites or searchable databases, may not damage your health, but it may seriously damage your research.

For reliable transcripts of Synagogue Records and  Cemetery inscriptions, visit CemeteryScribes and SynagogueScribes